“Our lobster rolls have proven to be popular on the island,” said Chef Mark Thomas, who owns The Clam Shack with his wife Laurie.

The menu is a smaller version of its sister restaurant, the 10-year-old Clam Bake in south Fort Myers. “We chose the best from our Clam Bake menu and brought those items to Sanibel,” said Mark, a graduate of Johnson and Wales University with more than 30 years experience in the food industry.

The menu may be a smaller selection, but it includes Ipswitch clams, stuffed quahogs and two kinds of chowder. There is the more traditional New England-style chowder and the broth-based Rhode Island chowder Mark grew up with in West Warwick.

“Sanibel reminds me a lot of the town I grew up and lived in for many, many years,” said Mark. “We are happy to be here, feels like home.”

The Clam Shack’s 50 seats have been filled by locals and regular visitors looking for tastes of the north or something different on the island. “We have received amazing support from the community,” said Laurie. “Everyone has been so welcoming.”

“We also extend a warm welcome Mark, Laurie and their Clam Shack to our islands,” said Chamber President Ric Base. “We wish them continued success.” 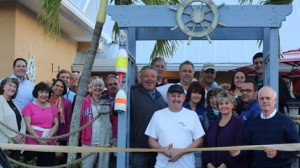