“We partnered with several island organizations, including our local Chamber, and strategized over the traffic numbers,” said Zimomra. “Our message is not ‘don’t come to Sanibel,’ but rather plan your visit to get the maximum island experience.”

While traffic has been a topic of conversation, water quality has taken front and center after an extraordinary 16 inches of rainfall in January. The situation caused back pumping of water in Lake Okeechobee and water releases from the lake by the Army Corps of Engineers into an already saturated Caloosahatchee Basin.

“When there is a crisis, we need somewhere to put the excess water,” said Dehnam, who along with Sanibel Mayor Kevin Ruane has recently met with nine Florida Senators on this issue.

Denham gave a call to write to the Army Corps of Engineers. “It’s a critical problem and you can help,” he said.

The afternoon was sponsored by the City of Sanibel, which incorporated in 1974 after the completion of the Sanibel Causeway 11 years earlier threatened to change the face of the island. Many were afraid Sanibel would succumb to over-development and lose its charm and natural heritage. Today, residents and visitors are able to enjoy the special ambiance and quiet harmony Sanibel and Captiva Islands have to offer.

A buffet-style lunch was catered by Sanibel Catering Company by Bailey’s, part of the historic Bailey’s General Store. It’s officially known as Sanibel Packing Company and was founded in1899 by the late Frank P. Bailey, who wanted to provide groceries and general supplies to locals and visitors. It’s a family business that continues to carry out his vision of providing quality products, personalized service and value.

For more information on the City of Sanibel, visit www.mysanibel.com. To learn more about the historic Bailey’s General Store, visit www.baileys-sanibel.com. 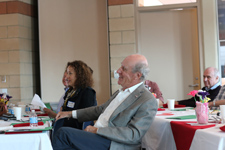